You may have seen the same post in the V6 section before i edited it and posted it here not realizing it was posted in the wrong section! Sorry about that it has the same title was not sure how to delete the entire post


So About A month or so ago I discovered the dreaded broken Manifold bolts on the driver side of my 17 RAM. It was pretty pronounced upon starting up so it was a pretty easy diagnosis. At the time when it was not so pronounced eventually getting worse my engine light popped on spitting out code P219B I had it cleared it stayed off for a bit then A few days before I got the manifold replaced with new Bolts it popped back on. While at my mechanic he checked the Passenger side as well and he said it looked good.
So its been about a few weeks or or so now and having experience the sound of an exhaust leak it sounds like I have another exhaust leak but this one is not as loud and it is not happening all the time I can hear it while going close to a wall, another vehicle or any object next to my truck I'm thinking its another exhaust leak this time on the passenger side I should have just had him do both sides while he had the vehicle but at the time he said the passenger side looked good.No noise on start up neither it happens intermittently!

With that being said I have now had code P219B pop up twice now reading through some posts I'm leaning towards that I may possibly have another exhaust leak I don't want to start throwing things at the truck EX:changing the bank 2 o2 sensor if that is not the case in your guys experience after changing one side of an exhaust leak have you had the opposite side fail shortly after testing ok for leaks?Also would you guys chalk this code up as a possible exhaust leak again. I crawled under the truck over the weekend and pulled on the passenger side heat shield a lot easier to get to ten the driver side but it feels pretty solid no movement I know that does not mean 100% that I don't have a small leak!

I know this has been spoken about on this forum on other threads so I'm not looking to rehash what others have said but combing through multiple posts sometimes can be daunting and sometimes not finding a related instance so I figured let me throw this question out there and maybe one of you guys could shed some light on this situation. Anything I may be looking for before I drop more money on another exhaust leak I think I may have another one but like mentioned its pretty quite upon start up and the shield feels solid! The light coming on is almost random it came on the other night just cruising down the highway with no load on the engine at all its a little head scratching!

Usually the manifold leak won't set any codes. V especially if it's so minor you could barely hear it. Mine was loud and set no codes. 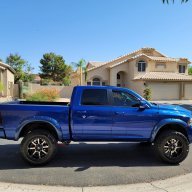 What fixed P219b for me was tightening the intake manifold bolts in sequence. Not sure why they loosen up. Chased my tail forever trying to solve that issue. P219b has never returned on my truck.
OP
OP
J

Thanks guys this is a head scratcher as it comes on out of the blue no lose of power,or hesitation MPG stays pretty steady at 16 it just seems to come on out of nowhere and not right away I know there is an issue somewhere for it to pop on but after clearing it that darn code is yet to come back truck is sitting at 70k right now.I’ll rediagnose when it comes back if he comes back I’ll try to throw it on a scanner again last couple of times it came on we had the truck running hooked up to a scanner and the numbers looked good this is a head scratcher

Thanks guys
You must log in or register to reply here.

J
Will a hard code clear on its own