I’ve been thinking of getting a new truck since I let go of my 14’ Ram Sport. Test drove a Ford, which was nice but I’ve always been a Mopar guy. Dropped by the dealership this weekend to test out the head room in a truck with the dual moonroof. Needless to say, I didn’t fit with the headroom (I’m 6’9”). I knew I wanted Adaptive Cruise so it was Limited or nothing for me.

I start talking with the sales manager and listed off all the things I needed. Limited with ACC, no moon roof, tow package, 3.92 gears. Turns out it’s hard to find a Limited without a moonroof and these things. Dealer “found” one incoming on transport. Had all this stuff plus 22” rims. Which I didn’t really want but figured I’d go with it.

Originally he brought over a printed window sticker without base cost or MSRP and started talking a “deal”. He was saying they were desperate to sell enough cars today. He would “cut me a great deal”. I said well it’s hard for me to know what is a deal when these papers don’t even have prices in them. He leaves for a few minutes and comes back with the costs in the base cost and MSRP boxes. Weird, but they lined up to what I know Limiteds cost. He asks what my monthly budget is and I said “I don’t have one, if I like the price of the truck I’ll buy it. What’s the deal you’re offering?” He hits me with $5k above MSRP. I laughed and said that isn’t a deal. Fast forward, I get the truck for $1,000 less than MSRP. I figured in todays market that isn’t bad. Who knows.

Now starts the weird stuff. He couldn’t tell me when exactly the transport is going to drop it off. I figured not a big deal, I’m sure they don’t have shipping trackers like a normal package. It’s late at night, my kids are on the edge of exploding, we sign the paperwork and take off. This was all typical dealer pressure tactics that we all know about.

The next day I had to drop by to get stuff out of my trade in. I asked for a window sticker of the truck I purchased. He printed it off for me, but this time the 22” rims where gone, big blank spot where they were on the sheet I saw the night prior. BUT the MSRP didn’t change. Weird. Somehow this $2k option is missing from the sticker. I point it out and he looks at it and says “weird, let me take a look at my computer” comes back a few min later and has the original sheet with the 22” rims on it, no change to the MSRP. He said that there were two identical trucks and he printed the wrong one.

All this isn’t adding up to me. What window sticker would show an MSRP that doesn’t add up to what the base price and add ons are. It’s clear he is manipulating the copies he is providing me. Little did I know he was also covering up the VIN and location in the bottom left on the window sticker as well.

This is fishy but I’ve signed documents already. I figure I’ll ride this out see what happens. I go home and start digging. Turns out the VIN points to a truck that is at a different dealer. Which I found weird because I’ve been told that dealers aren’t doing swaps with since inventory is so scarce. I call the dealer who actually has the truck up and tell them the situation and I wanted to confirm if this truck I bought was actually sitting at their lot. The manager over there thinks for a bit and says “I’m sorry your experience with that dealer isn’t great. When this truck deal falls apart give us a call, we will treat you right”. At this point I figure I messed up my chances of getting this truck, if I was even going to get it in the first place.

I called my dealer up and let him know what I found out. He confirmed that he has a deal in place to get the truck from the other dealer. I asked why he just didn’t say that in the first place and he said that people end up just going to the other dealer and purchasing the vehicles. I thought to myself “no shit, your tactics suck”.

He said that I was going to get the truck the next day but that the original dealer originally ordered the truck with 22” rims but then changed the order later and removed the rims. That’s why he had two different window stickers for the same truck. And I was getting the truck but it doesn’t have 22” rims. I’ve already signed papers with a cost that includes the 22” rims. So he says that he will either cut me a check or swap the rims for 22” he has on a different truck on his lot. He asked me to take the evening to think about what I wanted to do. (Thus my post about 20 or 22s on here)

He calls me late morning the next day and says good news the truck is in. We make plans for me to pick it up in the afternoon.

At this point I’m about 50/50 on if I’m going to follow through with this deal. I’m almost certain that the truck I signed papers on isn’t the one I’m getting. I’m ready to walk.

I pull up to the dealer and there is sitting a beautiful black Limited. Ok, wow it looks good, then I see on the back of the bed “4x4 Off Road”. My emotions jump then sink. I didn’t get a truck with the off road package. I wanted it but we couldn’t find it. I thought to myself, man I’d love to have that truck. Damit, this isn’t my truck.

I walk into the dealer and he says “hey, what do you think of your truck?” I said, where is it? Thinking that the Off Road wasn’t mine since I didn’t order it. He pointed right at the Off Road truck. I said it’s awesome but that’s obviously not the truck we discussed. He said no problem that we would just resign the paper work and switch out the VINs.

Immediately I was like, god damit, if I want this truck I’m going to have to cough up more money. We check the truck out. It is everything I wanted plus the off road package and a few other little things like electronic locking diff vs anti spin. No moonroof! It’s an awesome truck! But I’m waiting for the shoe to drop on price. He ushers us back into the finance office, sticks around and asks the finance guy to have us sign the deal outline papers first. There it is, sitting right in front of me, the truck is $1000ish less than the one I originally signed for and is more things I want!

Was super pumped, drove off with an awesome truck for less money. Well worth the headache he caused.

TL;DR - got yanked around by a dealer, almost canceled the deal, ended up with a better truck for less money. 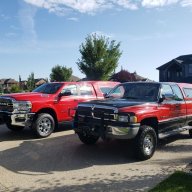 Pretty good story, glad you ended up happy, not sure I could tolerate someone lying to me like that, dicking around playing games and still be as good humopred as you are about it..
Last edited: Jan 27, 2022 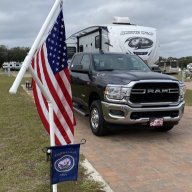 They should rename your dealership
Houdini CDJR… 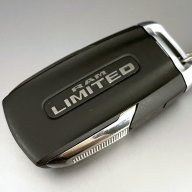 I just hate the car buying experience. But, glad it worked out for you!
M

It's tomorrow, pics or it didn't happen!
OP
OP

Pics time.
This one is at off road height.

This one is at entry height

Dean2 said:
Pretty good story, glad you ended up happy, not sure I could tolerate someone lying to me like that, dicking around playing games and still be as good humopred as you are about it..
Click to expand...

Im only good humored about it because it worked out in my favor in the end. I just wish the guy was upfront and not trying to pull these trucks.

wsutard1 said:
Pics time.
This one is at off road height.
View attachment 483969

This one is at entry height
View attachment 483970

Great looking truck @wsutard1 ... you should ceramic coat it right away yourself !!! protect the paint!
You must log in or register to reply here.

Frustrated with Dealership - What’s Yours?
7 8 9